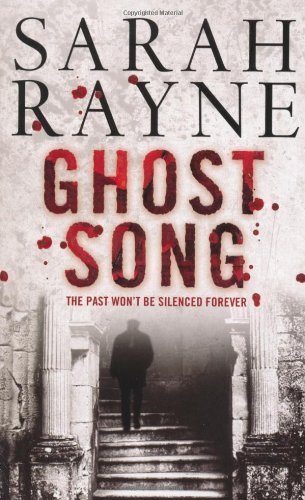 “If your taste runs to psychological thrillers with riveting plotlines, you will love Sarah Rayne…   Fast-moving action with unpredictable twists…”  Sussex Times

“All theatres are haunted…”

The old Tarleton music hall in London’s Bankside is the subject of a mysterious restraint that came into being in 1914 and has kept the theatre closed for over ninety years.

When Robert Fallon is asked to survey The Tarleton, he finds clues indicating that its long twilight sleep may conceal a sinister secret. He joins forces with Hilary, a researcher into Edwardian theatre, and they discover the legend of The Tarleton’s ‘ghost’ – a figure whose face was always hidden and who was first seen in the time of the charismatic singer/songwriter, Toby Chance, once the darling of Edwardian audiences until he vanished suddenly and inexplicably in the early 1900s…

After almost a century, The Tarleton’s dark silence is about to end, but there are people who find this a threatening prospect, and as Hilary and Robert delve into the remarkable history of one of London’s oldest music halls, they both become menaced by a secret from the past – a secret that has its roots in a shattering event that had to be kept hidden at all costs.

At this time of evening Platt’s Alley was dark and very unwelcoming indeed.  The rain lay in oily puddles everywhere, and little heaps of sodden rubbish lay in corners.

‘The stage door’s at the far end,’ said Robert.

Hilary shone the torch.  ‘There’s something carved into the stone over the door – can you see what it says?’

‘It says, “Please one and please all, be they great, be they small”.’

‘Nice,’ said Hilary approvingly.  ‘I wonder where it’s from and who put it there.’

‘Somehow I think it’s older than the ghost.  Or are ghosts ageless?’

‘Whatever they are, let’s hope we don’t meet any tonight.’

If  The Tarleton Theatre’s ghosts had been mildly inquisitive when Robert carried out his survey, on a dark, rainy night with only a couple of torches for light and semi-stolen keys for access, they were very nearly aggressive.

Hilary walked down the centre aisle.  Halfway down she looked up at the boxes at the side of the stage, and stopped abruptly.  Robert saw her expression alter, and said, ‘Is something wrong?’

Hilary was shining the torch onto the box.  In a low voice, she said, ‘I think there’s someone up there.’

Robert’s heart skipped several beats and although he was not aware of having moved, he discovered he was standing next to her.  ‘There’s no one there,’ he said, peering into the shadows.

Robert shone his own torch onto the box and for the fraction of a second thought he saw the shadowy figure of a man wearing a long coat and a deep-brimmed hat, pulled well down.

He said, ‘It’s an optical illusion.  Like when you see faces in cloud formations or cracks in a ceiling that look like a map of the world.’

But he remembered the boxes were quite deep; it would be possible for one person – for two or three people – to stand up there unseen.

They went back down the creaking old steps to the back of the auditorium.  Robert had just reached for the handle on the foyer door when Hilary looked back.  ‘Robert – listen.’

But Robert had already heard it.  Footsteps.  Somewhere in the empty theatre someone was walking about.  The sounds were soft but unmistakable.

As they went towards the stage door the footsteps started to come down from the dress circle.  Robert’s heart was pounding and he was aware of Hilary trying not to shiver.  And thenhe became aware of another sound.  A soft humming, was it?  It’s singing, he thought incredulously.  He’s singing to himself.  He glanced at Hilary and saw her eyes were wide with horror and he knew they were both remembering the words of the old stage doorkeeper.  ‘I heard him humming quietly as he went – almost as if he was using a snatch of music to keep himself company…’

He thought he had never heard anything quite so eerie as this soft wordless singing.  No torchlight showed anywhere and the footsteps were not hesitant or fumbling.  Whoever this was, he knew the way without needing lights – he was walking surely and firmly.  Robert tried to work out what they would do if the door was pushed open and the figure described in the old memoirs was standing there.

← House Of The Lost The Death Chamber →