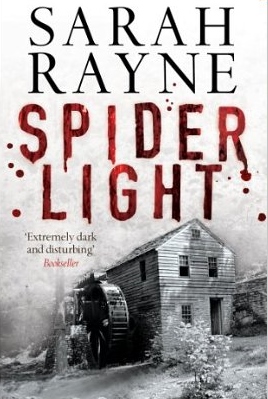 “The dangerous thing about spider-light is that it hides things – things you never knew existed in the world. But once you have seen those things, you can never afterwards forget them …”

When Antonia Weston comes to stay at a remote cottage in a sleepy market town, she is hoping for peace and anonymity after a shattering and all-too-public tragedy in her life. But shortly after her arrival, a series of disturbing incidents occur – incidents that eerily echo a past she is trying to forget. As Antonia struggles to re-build her life, she becomes increasingly fascinated by the macabre history surrounding her: the disused watermill, Twygrist, with its brooding darkness, and the now-vanished Latchkill Asylum. Memories of Latchkill still linger: memories of how, when the autumn dusk – the ‘spider-light’ – fell, no one would dare walk past its gates. Because a hundred years ago, people had lost their names and their identities inside Latchkill’s walls.

But Antonia’s fascination with the linked histories of Latchkill and Twygrist is put to dreadful use by someone from her own past. Someone who knows all about Twygrist’s darkness and someone who hates Antonia enough to plan her death.

It was not dark yet; it was the in-between time that was neither quite day nor quite night.She always found it a rather eerie time, because the light and the shadows could play tricks on you.

She unlocked the front door and stepped briskly into the sitting-room, flipping on the old-fashioned standard lamp, liking the friendly warm glow that flooded the room.

There was a faint movement just beyond the kitchen door which she had left half-open.  Antonia hesitated.  Something had definitely stirred within the kitchen, although it did not seem substantial enough to be a human intruder so there was nothing to feel scared about.

Or was there?  She took a cautious step forward, aware now of little creakings and rustlings that might only be the cottage’s timbers contracting in the cool evening air, but might as easily be the sounds of an intruder, creeping away into hiding.  Of all the neurotic ideas to have!

There was starting to be symmetry to the sounds.  Footsteps?  No, it was more like something moving backwards and forwards.

She had to take a deep breath before she could push open the kitchen door and step inside.  The kitchen was dark and her apprehension increased, and as she reached for the light switch something brushed against her face.  Something that was light and dry, and that felt for a terrible moment like an old, dead hand reaching out of the shadows to touch her cheek.

Panic grabbed Antonia, constricting her throat.  The unseen thing touched her face again, and she gave a half-cry, and hit out blindly. But her hands met only air, although there was the impression of some kind of thin movement directly in front of her.  She was shaking so much she thought she might fall down, but she finally managed to locate the light switch.   The entire room and what it held sprang into dreadful clarity.

Hanging from one of the rafters was a long thick rope – as thick as Antonia’s wrist, almost as thick as a man’s neck – and it was this rope that had swung into her face.  The end had been looped up and knotted to form a shape that was sickeningly familiar from dozens of images.  A hangman’s noose.  The method of punishment used until the middle of the twentieth century on men and women convicted of murder.

Antonia stared at it in frozen horror.   It was swinging slowly to and fro, pulling gently against the old ceiling joists as it moved and causing them to creak.  It was several minutes before she managed to put out a shaky hand to still it, hating the coarse feel of the hemp, but unable to bear the swaying back and forth like a hypnotising snake.

The rope had been moving because of the kitchen door opening, of course: the movement of air would have disturbed the rope, or the edge of the door might have caught it. It stirred and then began to sway again.  Exactly as if someone was holding one end of it, swinging it menacingly…   Come closer, murderer…   Step nearer so that I can loop this around your neck, and snap your spine, or strangle you into a slow death – it could go either way, you know…

Antonia’s precarious control snapped.  She gasped and ran from the kitchen, slamming the door hard.  Somehow she got across the sitting-room and wrenched the front door open, tumbling outside.

← The Death Chamber Roots of Evil →