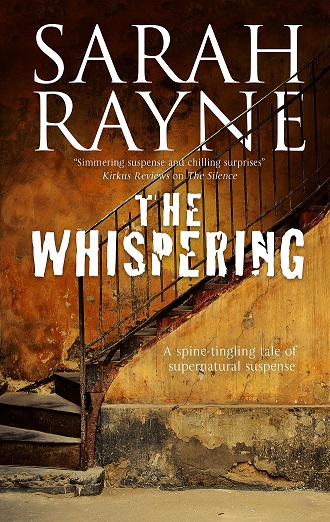 Fosse House, home of the reclusive Luisa Gilmore, harbours curious secrets – secrets that stretch back almost a century, to the ill-fated Palestrina Choir in its remote Belgian convent.
When Oxford don, Michael Flint, travels to the house to trace the origins of the long-dead Choir, he is at once aware of the house’s eerie menace.

Who is the shadowy young man who tries to get into the house every night, and why does his exact likeness appear in a sketch from 1917 and also a photograph from 1944? And why is Luisa so afraid when a storm makes it necessary for Michael to spent the night inside the house?

Back in Oxford, when Nell West uncovers the story of the infamous 1917 ‘Holzminden sketch’ – the lost, legendary drawing from WWI – a dark fragment of the past begins to stir… A fragment that Michael, in the lonely old house, may not be able to fight or resist…

The atmosphere of the old library – the scents of leather and vellum, the crowded shelves and stacks of what looked like manuscripts and unbound books – beckoned to Michael invitingly and insistently.

Luisa drew the curtains against the night.  ‘The storm is returning,’ she said.  ‘If you listen, you can hear it coming in from the fens.  I sometimes think it almost sounds like whispering voices.’  Without giving him time to think how best to answer this, she said, ‘So you will be as well to set off now, Dr Flint.  With a storm brewing the road from here to the village centre is an unpleasant one in the dark.’

Michael was about to say he would leave right away, when he caught sight of a thick folder placed on the table, together with a deep cardboard box, both clearly marked, ‘Palestrina Choir: 1900-1914.’

It was impossible to ignore them.  He sat on the edge of the table and opened the folder, which contained thick wodges of hand-written notes on various sizes of paper, clearly from several different decades.  The box held a mass of miscellaneous material, including several pages of typed notes, which looked as if they had been taken from reference books.

He was distantly aware of his hostess saying something about the contents of the room having been sketchily catalogued some years ago – something about someone writing a thesis which had never been completed – but he scarcely heard, because a sheet of paper, half folded inside an old envelope, had partly slid out from the clipped papers.  It was a letter, hand-written but in writing so erratic that Michael received the impression that urgency or despair had driven the pen.   The stamp on the envelope was foreign, and did not convey anything particular to him, but the letter was on thin, age-spotted paper, and the date at the top was November 1917.

He could not, out of courtesy to his hostess, sit down and read the entire thing there and then, but he had caught site of the first few sentences and the words had instantly looped a snare around his imagination.  The direction at the top was simply, ‘My dearest family.’

‘They’re allowing me to write this farewell letter to you, and I should be displaying bravery and dignity in it, so that you all remember me in that way.  Only I can’t do so, for I am facing a deeply dishonourable death – and an agonizing death – and I’m filled with such terror that I’m afraid for my sanity…’

← Property of a Lady