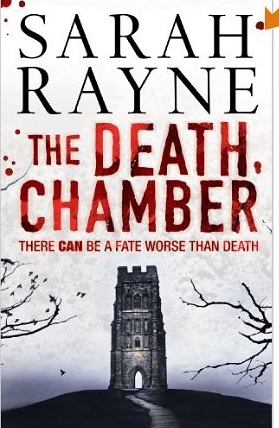 Calvary Gaol, standing bleak and forbidding on the Cumbrian hillside, exerts a curious hold over Georgina Grey. For her family’s history is closely bound up in its dark and terrible past. It’s there that her great-grandfather worked as a prison doctor in the 1930s, where his involvement in a bizarre experiment would change the course of his life forever. The experiment was never spoken of afterwards, but uneasy memories of it lingered for many years.

Georgina is intrigued to learn that her mysterious great-grandfather left his money to psychic research, apparently ignoring the claims of his own family. Travelling to the Cumbrian market town of Thornbeck to help wind up the unusual legacy, she meets TV presenter and anthropologist, Chad Ingram. And Chad is fascinated by Calvary too. He plans to conduct a new experiment in the now-disused gaol – an experiment that will take place in the brooding desolation of the old execution chamber.
But Chad’s experiment and Georgina’s curiosity are to have horrifying consequences. For there is someone in Thornbeck who is prepared to go to any lengths to ensure that the macabre past remains buried…

Walter Kane almost missed the signpost to Calvary Gaol, but he saw it at the last minute and swung the car sharply across the road and into the narrow lane.

It had been quite a long drive, but he had enjoyed it because he was still enjoying the novelty of owning a car.  It had been an extravagant purchase – if his mother had still been alive, she would have been deeply shocked.  The action of a spendthrift, she would have said.  It had always been tacitly understood that when Walter reached twenty-one and inherited his father’s money outright, it would be sensibly invested.  To provide a little income, his mother had said, because you won’t make a lot of money from doctoring: don’t expect that you will.

No.  Let’s be honest about that one thing if about nothing else.  The car is because I didn’t want any comparisons between this journey and the one my father took along this road twenty years ago.  I want to arrive at Calvary as my own master, in command of my own life, and I don’t want any ghosts travelling with me.

But the ghosts were with him anyway, and as he drove along the narrow road towards the prison he found himself thinking that the landscape could not have changed very much since 1917.  There might have been fewer houses then, although the farmhouse across the fields would have existed – even to an untrained eye it looked almost Elizabethan.  I don’t suppose you’d have seen it, though, said Walter to the memory of his father.  You wouldn’t have seen the lanes or the hedgerows either.  Oh damn, in another minute I’ll be conjuring up a reproachful spectre from the past, like something out of Hamlet, doomed to walk the night, forbidden to tell the secrets of the prison-house—   That would be just like my father, as well, because from all accounts he was fond of dramatic gestures.

But there were no such things as ghosts and if this particular prison-house did have any secrets it could keep them locked inside its walls because he did not want to know what they were.  He would think instead that his appointment with the board of prison governors was for three o’clock, and if he did not drive a bit faster he would be late.  He had no intention of being late, or of doing anything that might jeopardise his chances of this job.

He rounded a curve in the lane, and there looking down from a gentle slope of the English countryside, was Calvary.  The place of execution set on the hill.