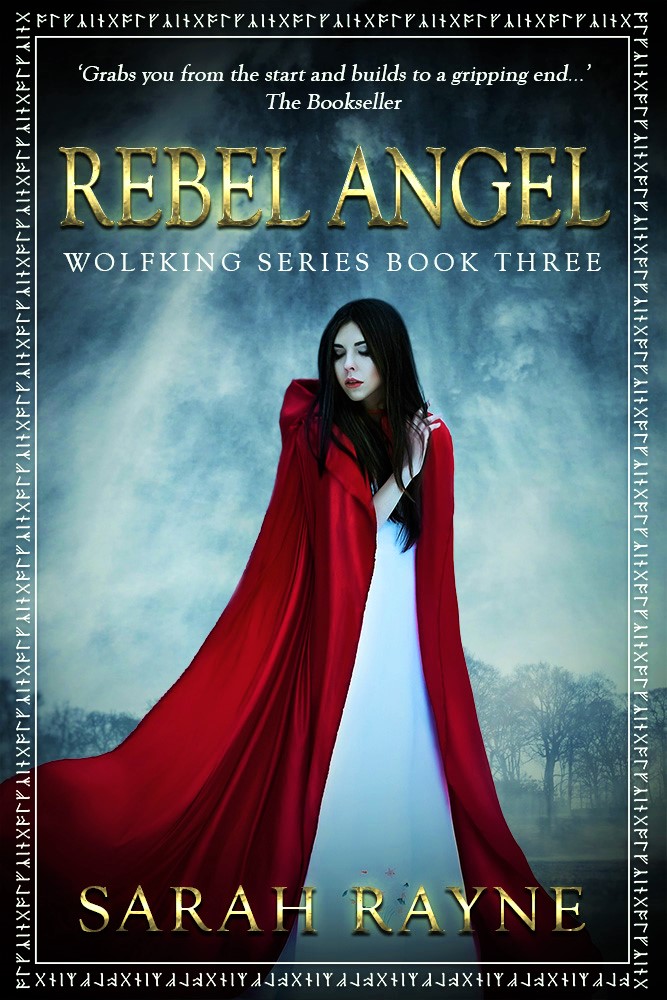 The time when the wolfkings ruled Ireland was over.

And so it seemed for the banished, bastard wolf-prince, Nuadu Airgetlam. He certainly did not want to reclaim the High Throne from the tyrannical Giants of Gruagach, or to win back Tara.
Into this menaced and repressed land, come two humans, Floy and Fenella, thrown from their own world by massive cosmic schism, and tumbled into the timeless lair of Fael-Inis, the rebel angel. And Fael-Inis has his own reasons for leading these humans into the depths of the Wolfwood and the exiled Forest Court – not least that his daughter, Flame, brought up in the decadence of her mother Reflection’s sorcerous Fire Court, is about to be betrothed to the brutal Gruagach leader, Inchbad.
Floy and Fenella, Nuadu and Flame, must find a way to free Tara from the giants and the evil Robemaker, who threatens all with his necromancy, and to save ancient Ireland from its indomitable foes…

This alliance, however, may prove too powerful for even this task.

Ireland awaits: will they be its saviour, or its killing blow?

The ancient and terrible Cavern of the Soul Eaters was lit to sinister life by flaring wall torches that gave out a thick, menacing glow, and cast dark evil shadows in the corners. To Fenella’s horrified eyes, it seemed at first to be filled with the evil red-eyed creatures who had captured them.
A great circular table, hewn from the solid rock of the cave, and worn smooth by the usage of centuries, stood at the cavern centre and Fenella, staring at the smooth-as-silk stone, felt all of the old Earth legends ebb and flow in her mind. Sacrificial altars and stone tables and tabernacles and oratories …
The Cavern was high-ceilinged and vast. Etched into the rock walls were carvings, elaborate cave-pictures, and there was the gleam of silver from the great stone table. Fenella saw that it was set with chalices and platters and remembered that the Soul Eaters were said to hold a nightly banquet and to feast on the Souls brought to them by their dark servants. Behind the table were Thrones, each one on a small, raised platform, and behind each platform was a heavy swathe of black velvet.
On the Thrones sat the Soul Eaters themselves, each one watchful, its massive wings folded across its breast like a cloak. Their bodies were not so very large; perhaps no more than man-size, but their wing-spans would be many times wider than a man’s outstretched arms. Several had homed heads, but in a few the horns were stumplike protuberances high up on the bony skulls. They were sapless and juiceless and mummified and Fenella thought that here, for the first time since she had penetrated into the Robemaker’s terrible Workshops and seen the treadmills, was the real darkness.
Nuadu moved forward to seat himself with careless grace on the edge of the table, and the Soul Eaters rustled their wings and eyed him.
‘If we agree to open the Cruachan Gateway,’ said one of them, ‘what would you offer us by way of payment?’
Nuadu regarded the Soul Eaters very straightly.
‘The soul of Ireland’s High King,’ he said at last. ‘If you will allow me to go through the Cruachan Gateway, I will bring you the soul of the imprisoned Prince, my half-brother. I will serve him to you on a golden platter and you may eat your fill before you fling his drained body into the River of the Dead. And then,’ he said softly, the wolfmask lying strongly across his face, ‘and then, Soul Eaters, Tara will be within my grasp.
‘Whatever prison they have devised for the prince will be difficult to penetrate,’ said the Soul Eater. ‘It may not be a prison of bars and walls. It may be a prison of dark enchantment.’
‘I am aware of that.’
The Soul Eater said, ‘We will open up the Gateway, and we will permit you to enter the Dark Realm. But we bind you by our own magical powers, to return to us with the Prince within seven days, and to render up his soul for our feasting.’