BUILDING THE INSPIRATIONS – AND AVOIDING THE PITFALLS 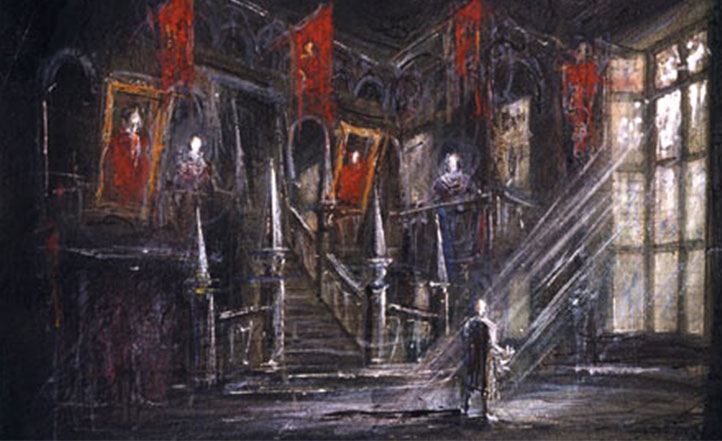 There’s a marvellous theme running through Benjamin Britten’s opera, Owen Wingrave, which is based on the Henry James’ story.  It’s, ‘Listen to the house.’  It’s something I’ve done for years.

Set for the BBC2 production of Owen Wingrave, designed by David Myerscough-Jones.

By ‘listen’ I don’t mean yomping round the Tower of London and thinking you’re hearing Ann Boleyn grumbling about the damp cell she was put in.  Or taking a guided tour of the Houses of Parliament, and imagining echoes of a muttered conversation in a dark corner… ‘And if we hide the gunpowder here they’ll never find it, but this time, Guy, please don’t forget the matches…

I mean ordinary buildings – places where people have lived and worked.  Their atmospheres, their histories, their usage, present and past – these are all chockfull of interest

There are, though a few pitfalls that can trap the unwary author who makes use of real buildings and genuine places:-

The original venue can have disappeared without you realising. In that case, there’s usually a reader who lives there, and who writes to you – or, worse, to your editor – indignantly pointing out that Arnold couldn’t have drowned Ethel in the duck pond, because since last year it’s been a supermarket.

The building is certainly still there, but between your research and the book’s publication the local authority has built a bypass and/or a four-lane motorway. Consequently, instead of the reader being able to imagine the unravelling of dark secrets and discreditable histories in a remote house shrouded in brooding silence, the action now appears to take place to the accompaniment of rumbling pantechnicons and police sirens chasing joy-riders.  Alternatively, a neighbouring land-owner has extended his farm, so the seduction scene in the coppice, with the heroine swooning to the scent of meadowsweet and the sound of birdsong, would now appear to happen against a backdrop of clattering tractors and the pungent atmosphere from the new pig-sties.

You base an historical sub-plot around a building, then discover the building no longer existed at the time of your story. This happened to me when I wove a Russian theatre into a sub-plot about the assassination of Tsar Alexander II in 1881.  It wasn’t until I had written four chapters that I discovered the theatre had burned down eight years before Alexander was bumped off – and that re-building hadn’t begun until two years after it.  At this point, I should acknowledge – and apologise for – the fact that writers have a regrettable streak of egocentricity.  I suspect it’s not uncommon for authors wanting to use an historical event to curse the fact that a war/coup/assassination happened inconveniently early or just six months too late.

You don’t check out the venue beforehand – probably because you’re too broke to travel to it at the time – but you write the book anyway. Later, you visit the place and

find it’s totally different.  Some years ago I wrote a contemporary horror novel based on the seventeenth-century Countess Elizabeth Bathory.  She used to bathe in the blood of virgins to preserve her youth and beauty.  (I have no idea if it worked, although clearly Elizabeth believed it did).  She lived in the Carpathian Mountains, but she also had a town house in Vienna.  When I wrote Blood Ritual I wasn’t able to travel to either place, but a few years later I did go to Vienna, and I found her house in a place called the Blutgasse – Blood Alley. I was pleased to discover that the Blutgasse was as creepy and ancient as I had described – one of those really eerie pockets of Old Vienna – owing its name, apparently, to the slaughter of the Knights Templar in the 12th century, when the old cobblestones ran with their blood.

However, at one end of the Blutgasse was a kind of T-junction, with a house that was open to the public – it  was possible to stand in one of the rooms of that house and look through the window onto Elizabeth’s residence. That house was open to the public because it had once been lived in by Mozart, who had composed a great deal of his marvellous music there.  So he would have done so while looking across to the home of a woman who, in her day, had slaughtered more than 300 young girls.  If a century and a half hadn’t separated those two, they would have been neighbours; they could have waved to one another, or discussed the weather when putting out the milk bottles.  It’s certain that I would have portrayed parts of that book slightly differently if I’d been able to travel to Vienna before I wrote it.

For years you intend to set a book at a favourite venue. In the town where I lived as a child was a semi-derelict castle.  It stood on the summit of a small hill – the old feudal lords always built their strongholds high up so they could keep out a watchful eye for any enterprising enemies that might sneak up on them.  The original

medieval castle fell victim to a variety of fates, but the main reason for its downfall, was Time.  Simply, it crumbled away. So, with typical nineteenth century gusto, a replica was built on the site.  But it was a replica so outrageously gothic that if it had been offered for sale, Bram Stoker and Mary Shelley would have climbed over one another to own it, and Edgar Allen Poe and Matthew Lewis would have been taking gleeful notes.  I was always determined to write a book using this gorgeously gothic old pile and its back story.  And then, one dark and stormy night (what else could it have been?) it toppled down.  The fact that it did so in instalments, one chunk at a time, rather than in a dramatic avalanche of stones and turrets, did nothing to save the embryo plot.

But using a real place can sometimes work brilliantly.   About 10 years ago I discovered a wonderful 15th century flour mill in Nether Alderley in Cheshire.  The National Trust team

there gave generously and enthusiastically of their time and knowledge, and the result was the macabre and – to quote one review – ‘nightmarishly unforgettable’ Twygrist Mill in Spider Light.  It looked, as one character said, as if it had ‘grown up by itself overnight when no one was looking.’

So, on balance, it’s usually easier, better for the plot, and certainly a lot of fun, to set aside real-life scenarios and construct a fictional building – mental word-brick by mental word-brick.  That being so, I’ll end this blog by explaining I’m off to don a hard hat, some snazzy overalls, and get the stepladder down from the attic…